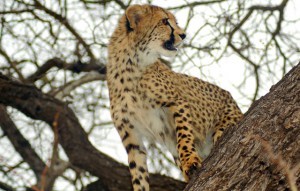 Established as a tour and safari operator in 1980, Rolling River Safaris has its roots in the heart of Africa. Set up as a family run safari business in Zimbabwe, initially only catering for a limited number of plains game safaris, the company has grown over the last 30 years, operating throughout the continent.

As the principle Professional Hunter, Phillip Oosthuysen has been responsible for all aspects of these safaris from marketing in Europe and U.S.A., liaison with government departments, negotiating and securing hunting leases, the daily running of safari camps as well as successfully conducting safaris.

Having hunted extensively in Southern Africa together with his exposure to regional game departments during his tenure as Chairman of the Wildlife Producers Association in Zimbabwe, Phillip has a broad understanding of the safari business in southern African countries.

Phillip is now based in North Carolina with his family having relocated in 2006 from Zimbabwe. Acting as a safari consultant and still carrying out regular hunts on request, Phillip is well versed in ensuring that every client receives first class attention to detail in all aspects of safari bookings.