A. Australia is bigger in area than the USA and bigger than Western Europe. It consists of almost every kind of terrain from its famous sandy beaches, to the Great Barrier Reef, mountains, snowfields, dense forests, rich soils for dairy, wine and farming country. Further inland are large grain farms. Then to the north are outback sheep and cattle stations of enormous size with only the native bush and grasses for feed. In the central regions there is very hot, dry, arid country with large deserts. It is a big country and driving from Perth to Darwin or Melbourne to Darwin will take 3-4 long days with minimal stops. Well priced airlines Qantas and Virgin are popular to fly between states and all cities. Australia’s main population is in the south which has the opposite seasons to the northern hemisphere with January/Febuary being mid summer and July/August being cold rainy winter. 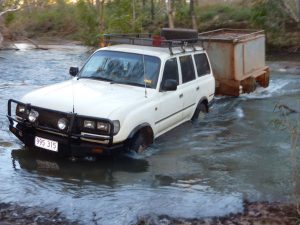 A. NOTE: The top of Australia has a TROPICAL climate. The Northern Territory (NT) is always hot and its rainy season is opposite to the rest of Australia. During Nov, Dec, Jan, Feb, March the Northern Territory will have tropical storms and heavy rains with high humidity called the Wet Season. Vegetation and grasses have incredible growth. Rivers and creeks are regularly flooded and the ground is too boggy to get around.

The hot and dry months of June, July, August, September are called the Dry Season and perfect for hunting. Outside of the city of Darwin, most of the land remains native bush and is cattle station country. As the cattle stations are so large (500,000 – 1,000,000 acres) helicopters are mostly used to muster the cattle.

A. The access to Arnhemland which is situated East of Darwin, is restricted. Arnhemland is a massive wilderness area of almost 100,000 sq km owned by Aboriginal Traditional Landowners. No farms, no fences, no developement, just real genuine wilderness. Some areas in Arnhemland have high numbers of Buffalo; some have none. Hunters need a 1 1/2 hr charter flight to reach the remote hunt concessions. Australian Buffalo Hunters negotiate the best charter cost price/hunters which most times means that this flight cost is shared.

Q4. History of the Asiatic WATER BUFFALO in Australia? 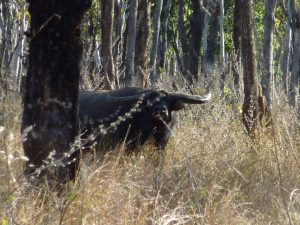 A. Buffalo were imported from Asia by sailing ships for meat in the early northern settlements in the 1820’s. When these settlements were abandoned the buffalo soon colonised through tropical country and swamplands, then spread across the Northern Territory. Over nine decades from the 1880s, animals were harvested on foot, from horseback and eventually four-wheel drives. Many businesses processed meat for human consumption (local and export), pet meat, hides, animals for live export and game for hunters. However by the 1970s, feral buffalo numbers were so high that they were damaging wetlands and potentially harbouring diseases that could effect the beef export market. Beginning in 1979 the Brucellosis and Tuberculosis Campaign over an intense 3 years, erradicated feral buffalos from all the station country, national parks and wild areas. The only remaining Herds were left in central and eastern Arnhem Land. These Buffalo are now a valuable resourse and used for meat and hunting by local Aboriginal communities and licensed safari operations. Live capture and inspection allows many Buffalo to be used for Export with some relocated to private game ranches. Arnhemland Buffalo herds roam freely and like most wild animals sustain their own numbers according to seasonal conditions.

Q5. What are Buffalo habits and foods?

A. During most of the dry season (May-October) it is common for males and females to live seperately. Females and young are led by an older female. Males inhabit more open plains or slopes with dryer vegetation. When the season breaks, the older males join the females and drive away younger males. Although having young anytime, there is a peak of mating in about March and pregnancy lasts about ten months. In wet areas buffalo graze on aquatic grasses and in dry areas they eat a broad range of grasses and the leaves of shrubs and pandanus. Bulls eat upto 30kg of dry matter each day. Dingos and crocodiles occassionally prey on young buffalo, but once adulthood is reached individuals may live 15-20years.

Q6. How big are Asiatic Water BUFFALO? What RIFLE or BOW to use? 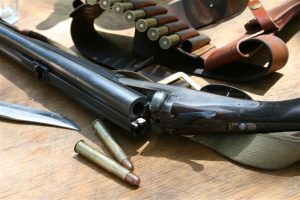 Q7. When to Book? Can I bring my own RIFLE to Australia?

A. It’s best to Book your Safari in Nov, Dec, Jan or Feb and have your paperwork completed by March or April. The hunting is in June, July, August.

Yes, you can bring your own rifle and ammunition. ABH will assist (no charge) with your Northern Territory Police Visitors firearm license application and they will pay the fee. NOTE – the Application must be completed as soon as possible to prevent delays; this will take 15 minutes. Photocopies of your passport and a hunt or firearms license is also required.

When leaving Australia with your firearms the Licence and Export papers must be completed and returned to the airport customs office (similar system as foreigners going in/out of USA).

Police outposts were established in 2007 in remote Arnhemland communities and one of their duties is to inspect vehicles and stop poachers. As a safari operator we carry copies of our safari operators firearms licence, permit for vehicles, staff and hunters, land use authority and have your International Visitors Firearm license at hand. 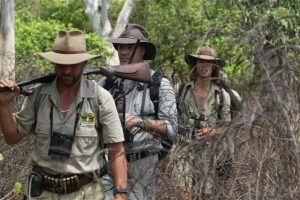 Q9. Can we shoot KANGAROOS & Dingo’s?

A. Recreational hunting of kangaroos is restricted, although where damage permits are issued suitably licensed shooters control kangaroo numbers which are too high in many southern farming regions. For many years now it has been illegal to shoot Dingo’s in the Northern Territory.

Q10. TEMPERATURES in the Northern Territory?

A. The Northern Territory has a tropical climate with extreme DRY and WET Seasons. The Dry season is very pleasant hot summer weather (max 25-35°C 80-95°F) and is most suitable for hunting during June, July, August and September.

Australian Buffalo Hunters do not operate in the Wet season which is very unpleasant, humid, raining and hot (max 30-40°C; 85-104°F) from November to April.